***This Listing Brought to you Courtesy Of T206 Society***

A sharp example of Cleveland Naps third baseman Bill Bradley. The card features the rare variation of the Polar Bear back in which the letters “IE” are absent from the word “SERIES”. To our knowledge, this particular variation has been confirmed to have occurred on only three subjects (to date) : Bradley “with bat”, Doolan “batting”, Bergen “catching”.

Considered one of the best fielding third basemen in MLB history, Bill Bradley led the American League in fielding four times. Also a solid hitter, Bradley batted .340 in 1902 and was the first Cleveland player to hit for the cycle on September 24, 1902. He was player/manager for Cleveland in 1905 and for Brooklyn of the Federal League in 1914. Between his American League and Federal League tours, Bradley played for the Toronto Maple Leafs in the International League, batting .288 over three seasons. In 1916 he managed the Erie Sailors in the Interstate League. He then scouted for Cleveland for 25 years, retiring in 1953. Bill Bradley was elected to the Cleveland Indians Hall of Fame in 1957. 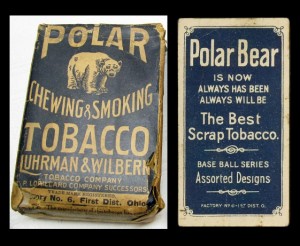