A quality example of St. Louis Browns Pitcher Barney Pelty. The card features the Uzit advertising reverse (ranked 6 of 39 in terms of scarcity according to T206 Resource). One the prized treasures of the T206 issue, the Uzit.

Barney Pelty’s nickname, “The Yiddish Curver,” reflected the two most notable aspects of Pelty’s career. He was one of the first Jewish major leaguers, and he possessed a very impressive curveball, which helped him amass 92 big league wins over ten seasons. In 1906, he went 16–11 with a 1.59 ERA, good for second in the league. The following year, with just a 2.59 ERA, Pelty led the league in losses with 21. His career 2.63 ERA indicates that his .440 career-winning percentage is the result of his mound address. Of his 117 losses, the Browns were shut out in 32 of them, and Pelty won 22 of his 92 wins by shutout. After his playing career ended in 1912 he coached baseball and football and did some scouting. He was also a businessman and alderman in Farmington. 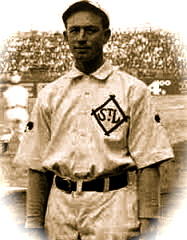